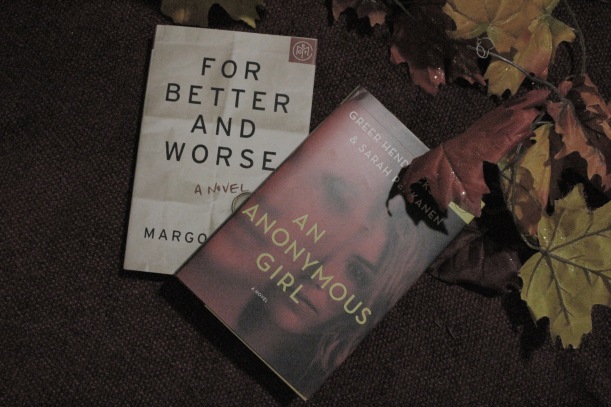 I picked two books in December for book of the month I picked a January release An Anonymous Girl it has been an anticpated release for me and I’m excited to get to it.  I watched some people’s reading vlogs and they picked For Better and Worse in November and it sounded good so I wanted to get that one as well.

Seeking women ages 18–32 to participate in a study on ethics and morality. Generous compensation. Anonymity guaranteed.

When Jessica Farris signs up for a psychology study conducted by the mysterious Dr. Shields, she thinks all she’ll have to do is answer a few questions, collect her money, and leave. But as the questions grow more and more intense and invasive and the sessions become outings where Jess is told what to wear and how to act, she begins to feel as though Dr. Shields may know what she’s thinking…and what she’s hiding. As Jess’s paranoia grows, it becomes clear that she can no longer trust what in her life is real, and what is one of Dr. Shields’ manipulative experiments. Caught in a web of deceit and jealousy, Jess quickly learns that some obsessions can be deadly.

On their first date back in law school, Natalie and Will Clarke bonded over drinks, dinner and whether they could get away with murder. Now married, they’ll put the latter to the test when an unchecked danger in their community places their son in jeopardy. Working as a criminal defense attorney, Nat refuses to rely on the broken legal system to keep her family safe. She knows that if you want justice…you have to get it yourself.

Shocked to discover Nat’s taken matters into her own hands, Will has no choice but to dirty his, also. His family is in way too deep to back down now. He’s just not sure he recognizes the woman he married. Nat’s always been fiercely protective, but never this ruthless or calculating. With the police poking holes in their airtight plan, what will be the first to fall apart: their scandalous secret—or their marriage?